For the past few days, Shake Shack has been hiding a secret Game of Thrones menu at their Madison Square Park location. Starting on April 12th, that exclusive collab will be made available at locations nationwide. 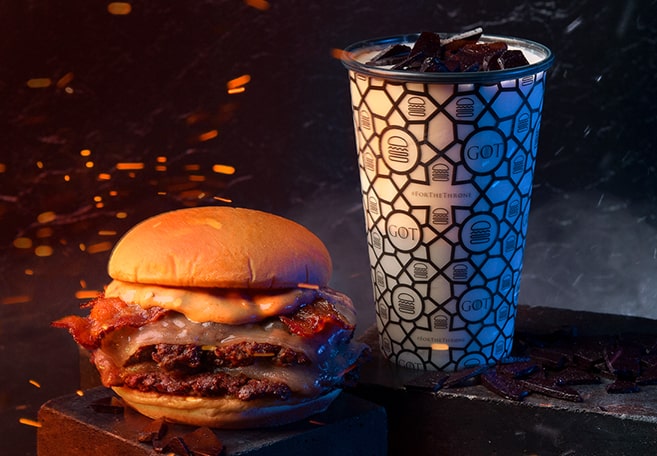 Unlike the hidden menu at the Madison Square Park location, you don't have to order in Valyrian if you don't want to. There is a pronunciation guide available, though, for those who want to channel their inner Game of Thrones geek.

Both items on the collab menu, the fiery Dracarys Burger and minty Dragonglass Shake, will have different availabilities. The Dragonglass Shake, which is a mint chip shake with shiny black toffee shards on top, will be sold at locations nationwide except for those at airports, ballparks, stadiums, and transit centers. You'll be able to get it through May 19th.


The original @ShakeShack location in Madison Square Park is serving 2 new @GameOfThrones themed menu items until April 21st—but you may only order them while speaking Valyrian! But fear not, Shake Shack has released a guide to help you pronounce the words necessary to procure your fire & ice themed delicacies. (Find the guide in our Story highlight.) • ?? The Dracarys Burger is a double Monterey Jack cheeseburger topped with bacon and “fiery Shack Sauce” which contains a blend of Carolina Reaper and chipotle pepper. This burger is actually everything we’d already want from a cheeseburger, plus the fiery sauce which elevated the experience in ways ketchup and mayonnaise cannot. We don’t like jalapeños, but we aren’t afraid of heat either, so this sauce helped deliver that sensation in a tastier way. “Caution: may be too hot for non-Targaryens.” • ? The Dragonglass Shake is made with minted white chocolate custard topped with shards of “Dragonglass" (shiny toffee). When it comes to mint flavored treats; we are not the biggest fans. But from time to time, we do find an exception. This shake is one of them! The mint flavor is not too strong, and the toffee combined with it really blew us away. I want more toffee now. #mnmtwinzEats • #ShakeShack #GameofThrones #ForTheThrone #Targaryen #WhiteWalkers #Cheeseburger #Burger #Bacon #Milkshake #Shake #Toffee #food52 #thekitchn #foodgawker #f52grams #beautifulcuisines #thefeedfeed #foodstyling #eater #thrillist #tastingtable #onthetable #Foodie #FoodNews #IIFYM #FlexibleDieting #Macros #Diet

As for the Dracarys Burger, its availability will be much more limited. This spicy bacon double cheeseburger will only be sold at the following Shake Shacks:

All of these locations will have the burger available through April 21st.

Featured Image courtesy of Marcus and Matthew at @mnmtwinz on Instagram.