In an attempt to make the Japanese as fat and happy as we Americans are, McDonald's will be releasing their new Giga Mac Burger, the biggest thing to hit the streets of Tokyo since Godzilla.

Slated to be released in two days, the behemoth burger will feature all of the same ingredients as the standard Big Mac, only it will have 2.8 times the amount of meat in them. Not only will there be four patties instead of two, but the patties themselves will be thicker and wider, which is apparently where that .8 comes into play. 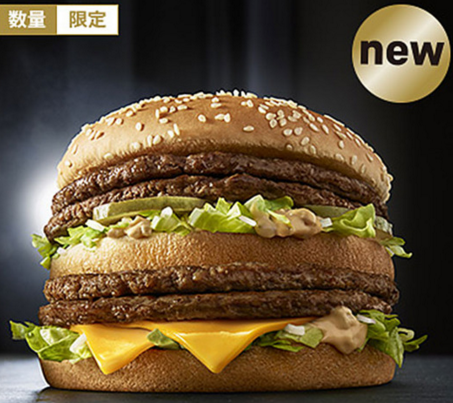 It comes as no surprise that the creative minds behind the menu items in Japan came up with this. Their previous ideas included things like chocolate drizzled fries, a mashed potato burger, and Shaka Shaka potato fries. They even got in on the fun for April Fool's Day, introducing fake items such as the Sugar Burger and the Bamboo Burger.

According to the Rocket News 24, the company claims that by finishing this enormous burger, you'll achieve "a satisfied sense of accomplishment." Accomplishment? Really? That's what we're going with here, huh? The company will also be releasing an enormous soda and enormous fries to go with the burger because apparently "large" isn't large enough. They're also releasing a Grand Big Mac, which is slightly larger than a Big Mac but slightly smaller than a Giga Mac. Their giga drinks and giga fries will be 2 times and 1.7 times bigger than their large size counterparts. For reference, one giga-sized drink would hold 64 oz, double the size of a large drink, which translates into the same amount as 5.3 cans of soda.