One woman wants to win the Taco Bell wedding contest so badly, she has fashioned a dress as tribute to the fast-food chain Here comes the bride, all dressed in… the remnants of yesterday’s fast-food lunch?

Last month, Taco Bell announced that they would be hosting a contest for one lucky couple to get married at Taco Bell in Las Vegas, and one woman is determined to win. Diane Nguyen entered the social media contest wearing a surprisingly chic wedding dress made entirely from Taco Bell burrito wrappers. We can’t say whether we’re befuddled or impressed at such an ardent dedication to Mexican fast-food, but perhaps it’s a hearty mixture of both.

The couple even submitted a cheeky photoshoot holding hands over the counter at their local Taco Bell. 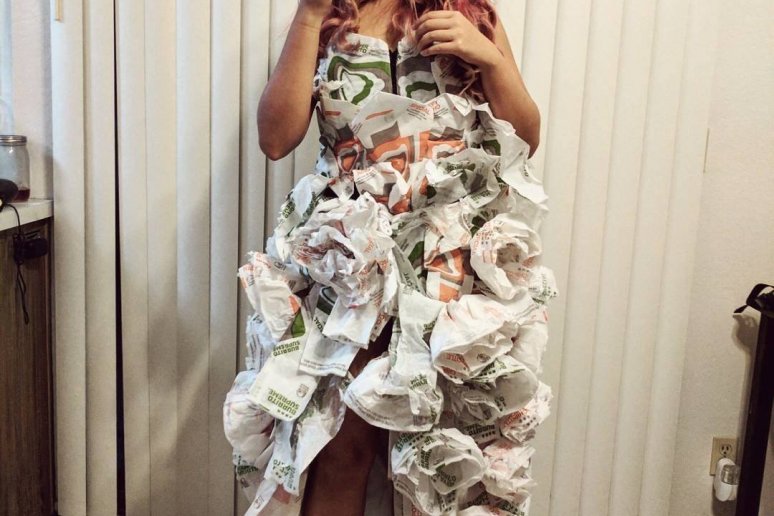 “IT’S TIME TO VOTE!!!!!!!! We didn’t know until recently that it was our dream to get hitched at a Taco Bell,” Nguyen said in an Instagram post. “We also didn’t know about this contest until we were out of the country and halfway around the world. With help from our friends and a bit of extra hot glue we got off the plane and immediately scrambled to shoot a photo at our local restaurant before the deadline.”

Taco Bell will be announcing the winners later this month after voting ends on March 5. We imagine if Nguyen comes up empty, she’ll have some beef with Taco Bell… but guac’ you gonna do about it?

This article was written by Joanna Fantozzi, (The Daily Meal)