The Supreme Court handles cases that deal with all avenues of life, and eating and drinking are no exception. The Highest Court is on everyone's mind these days, from the Illuminati-esque death of Justice Antonin Scalia to Justice Clarence Thomas' surprising break from his usual silence. Naturally, we started wondering if there have been any SCOTUS rulings in the world of food and drink that have affected our lives in major ways, and whether we would have a chance to bring them up the next time we're trying to sound knowledgeable at a party. Yes and yes. 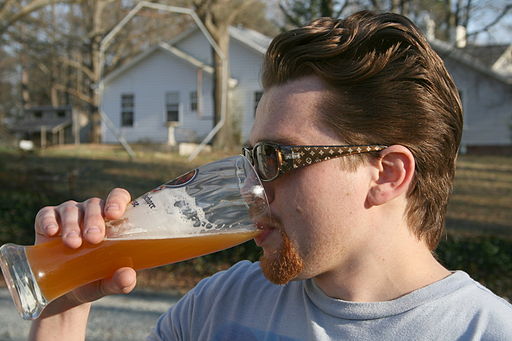 In South Dakota v. Dole, the court had to determine whether Congress' 1984 National Minimum Drinking Age Act is constitutional. Because of the states-rights focus of the 21st Amendment, one of the finest pieces of writing in American history, the federal government can't directly enforce a minimum drinking age — it's up to the states to regulate everything to do with booze. So to put some pressure on the states, the NMDAA withholds 5 percent from the transportation budget of any state that doesn't enforce a 21-or-older drinking age.

At the time, South Dakota wanted to get 19-year-olds drunk while maintaining 100 percent of their federal highway funds, which should obviously replace "have your cake and eat it too" as an idiom for wanting it all. So the state sued. In a 7-2 decision that has kept 19-year-olds from drinking ever since, the court found that Congress was within its constitutional right to blackmail states so long as it was a reasonable amount of blackmail. Alcohol again!  Granholm v. Heald was a 2004 Supreme Court case that centered around red-blooded Americans in Michigan and New York wanting the inalienable right to have booze shipped to them from wherever they pleased, because, and this can't be stressed enough, this is America. Those states allowed in-state wineries to ship directly to in-state consumers but did not allow shipments from wineries outside their borders. The states argued that the 21st Amendment guarantees states the right to police everything about alcohol, including its use as a pawn in the game of monopolistic business practices, apparently.

In a 5-4 decision, the High Court ruled that the states were violating a clause of the Constitution that has to do with interstate commerce, but that's boring, so let's just pretend a majority of those justices were winos. Unfortunately for us consumers, the ruling didn't mean all states have to allow booze shipments, just that states couldn't have different rules for out-of-state businesses. State liquor control commissions being the antisocial weirdos of this playground we call American bureaucracy, they didn't just open the booze cabinet and invite everyone to party, particularly in Michigan, where their response was to ban all direct shipments of booze, effectively taking their ball and going home. Pom Wonderful v. Coca-Cola was a 2014 Supreme Court case that at its core asked: Can we sue a beverage company for misleading packaging? It was not, weirdly, a lawsuit about whether pomegranate can even be considered a fruit, rather than a stone-filled orb that's possibly from another planet. The details about why this was even a question are interesting and well documented elsewhere. The main takeaway is: A very important round of the false advertising wars would be fought on the field of juice. Pom claimed that Coca-Cola had deceived consumers with a product that contained less than half a percent of the fruit they named and showed on the bottle.

Regardless of their motivation, in bringing the suit Pom was asking an important question about consumer rights when it comes to false advertising on food packaging, which had historically been practically untouchable because courts didn't want to undercut the FDA's authority to police food advertising claims. Where would we be if we superseded the FDA's jurisdiction over juice, after all? The Supreme Court ruled in favor of Pom unanimously (though one justice did not take part), which allowed the suit to proceed. The important result for consumers is the decision paves the way for food and beverage companies to be more diligent about false advertising, and now your bacon-infused whatever better have some damn bacon in it, legally speaking. Aaaand back to booze. In the 1950s, Rhode Island enacted a statutory ban on any advertising that listed the price of liquor, because we all know that the first step toward alcoholism for many Americans is the inability to pass up a good deal. In 1985, 44 Liquormart sued the state after the company was fined $400 for including liquor in an advertisement next to some mixers and snacks that had prices listed. The citation was issued because 44 Liquormart implied it had low prices and also showed liquor, which sounds like an overreach even for the original law, which in itself seems unconstitutional. 44 Liquormart thought so too. The lawsuits flew, and after a roller coaster ride through the lower courts, the Supreme Court heard arguments in 44 Liquormart, Inc. v. Rhode Island. The justices unanimously agreed that the law violated the First Amendment, which was probably better for 44 Liquormart's marketing than being able to put prices on their ads. Maybe their next move should be to team up with Pom Wonderful for a marketing campaign focused on pomegranate cocktails that are truthfully advertised and specifically reasonably priced. And lest you assume Supreme Court rulings on the food and beverage industry result in only narrow changes to the way life works, check out Katzenbach v. McClung: Ollie McClung was a barbecue aficionado and huge racist in Birmingham, AL, in the '20s. His restaurant had been in business for nearly 40 years by 1964. At that time, many restaurants allowed only white customers inside for table service, with everyone else (primarily black people) relegated to a takeout window. The white restaurateurs had found a way to honor their core value of greed without having to compromise their core value of racism. But the Civil Rights Act of 1964 threatened to change the game.

McClung, supported by many other local restaurants, challenged the constitutionality of the Civil Rights Act, filing a lawsuit claiming federal government had no jurisdiction to impose its law on a small local business. The Supreme Court eventually got the case, but twist! One of the justices at the time, Hugo Black, was a Birminghamian whose wife was a regular diner at Ollie's. Oh, and one more thing: Justice Black (amusing/frightening juxtaposition in 3 ... 2 ... 1) was a former member of the KKK. And not for nothing, but the other eight justices didn't exactly represent a cross-section of US culture either. Granted, it was a majority liberal court, but still, during the McClung case five of the nine justices were white men born in the 1800s, so their definition of "progressive" wasn't necessarily a lock.

Yet the Court ruled unanimously in favor of the right side of history, citing the fact that Ollie's sourced ingredients from out of state, meaning interstate commerce applied and the Civil Rights Act could be enforced. Tricky! Ollie's could no longer discriminate, and despite being forced to serve everyone in the same manner, the restaurant stayed in business for over 30 more years. It was a landmark decision for the Civil Rights movement that helped pave the way to eliminate segregation in all forms.