You Must Sign a Release for this 8,000-Calorie Breakfast 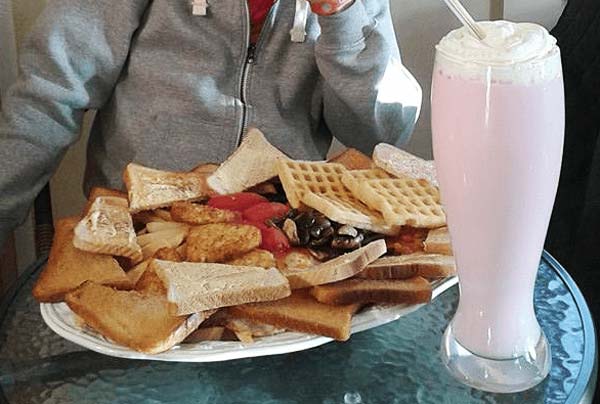 If you feel guilty after inhaling a McDonald's Breakfast Platter, the UK has a morning dish that will definitely make you hang your head in shame. Mark Winder is the owner of the Bear Grills in Congleton, Cheshire. Inspired by "Man vs. Food," Winder came up with a ridiculous breakfast platter one might see in an animated cartoon. He calls it the Hibernator.

At about 8,000 calories, the Hibernator consists of eight pieces of bacon, eight sausages, four hash browns, four pieces of toast, four potato waffles, four pieces of fried bread, a four-egg cheese omelette, beans, mushrooms, tomatoes and large chips. Don't bother ordering a Diet Coke with your meal, however, as the platter also comes with a large milkshake to wash everything down.

Because of its high-calorie count, Winder requires all of his customers to sign a legal disclaimer before attempting the breakfast. Because y' know, death.

As with most food challenges, customers have the opportunity to earn their place in the restaurant hall of fame. If they are able to finish that mountain of starch and fat in a thirty-minute window, they can earn back their £19.95 ($25.18 US).

The monstrous meal is served on a turkey platter and weighs about seven pounds. According to Winder, no one has yet been able to finish the Hibernator in one sitting.