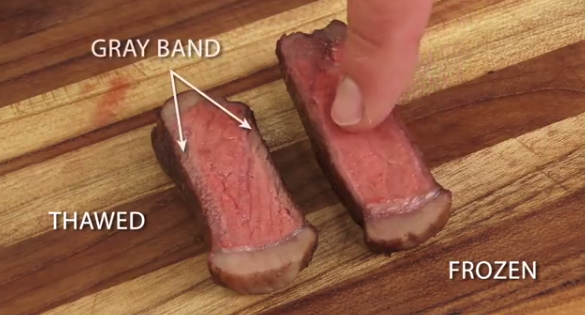 Life should never come down to cooking a frozen steak, but sometimes you're too impatient to wait for that meat slab to thaw. Luckily, America's Test Kitchen has come up with a method for cooking rock solid meat that actually turns out to be freakin' delicious.

ATK compared the cooking of thawed and frozen steaks by first searing the pieces for 90 seconds on each side, then finishing them off in the oven. Not surprisingly, the frozen versions took a few more minutes to get to medium rare, but they browned just as quickly as their warmer counterparts when seared. Even more interesting is the frozen steaks ended up having a thinner band of gray, overcooked meat below the surface and retained more moisture than the thawed meat.

The result? America's Test Kitchen preferred the cooked-from-frozen steaks, hands down. Still, nothing beats fresh steak, thawed or not.

Check out how to freeze, avoid flare ups and cook frozen steak below: