The Worst Sandwich Some Guy On Yelp Ever Ate

Yelp has lead me to the best pork bun I ever ate, the finest gourmet cocktail in Los Angeles and almost deterred me from a quaint and affordable bed & breakfast because reviewers claimed that the front desk attendants were rude and a homeless man walked too close to the reviewer's daughter. I decided to stay at that bed and breakfast. Although the curtain-heavy wooden rod did fall when I tried to close the curtain, I slept happy, ate free muffins in the morning and through it all the attendants smiled, albeit weakly. 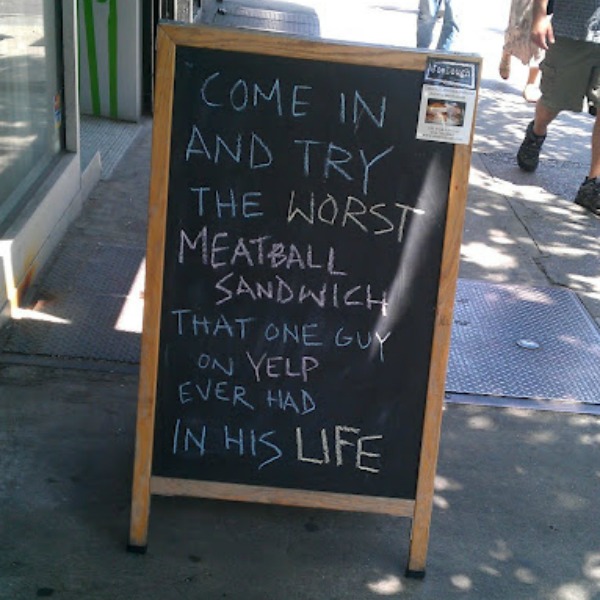 There's a lot of buzz amongst business owners because just a few bad reviews can have really costly effects; for one owner, a bad review resulted in a 25% drop in revenue. Many believe that Yelp removes negative reviews in turn for advertisement and neglects to remove possible fake bad reviews on other businesses which don't participate in the advertisement, prompting some to take Yelp to court for extortion. You could do that, or you can draw customers in with a  joke about the whole situation, which may just be an algorithm issue to begin with. Come on, aren't you a little curious about that meatball sandwich?

via cnet/photo courtesy of flavorpill