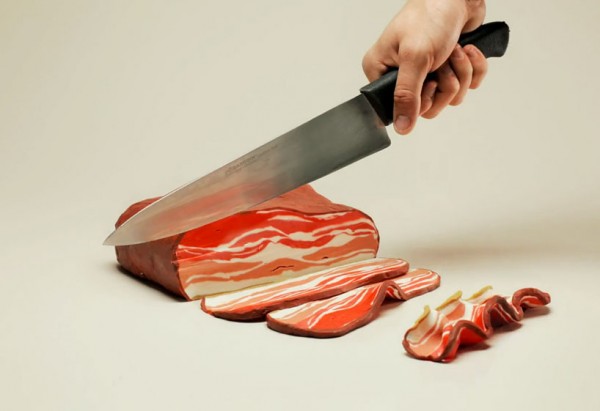 It's been a long time since I sneaked off into the lunchbox-and-dirty-shoes corner of a classroom, tiny sphere of pilfered Play-Doh in hand. I had chosen red. Like all candies, ever, red was certain to be the best flavor, full of all the tang and spice a three-year-old foodie could handle. And how could it not be? Have you ever smelled Play-Doh? Of course you have. You're human. Even now, the thought of that weird, salty, dough scent makes my mouth water (don't judge me).

Fast-forward twenty years, and some hope has been restored. French art director and illustrator Alexandra Bruel must have had an equally traumatic childhood, but unlike me, she got up and she did something about it. Apparently, she refers to her medium as 'plasticine', but really, guys, it's Play-Doh. It's grown-up Play-Doh, and she's made it into crazy awesome stuff like bacon (inedible), bejeweled bananas (inedible, sexy, no, not that way), and pimped-out soup cans (soups can have always been inedible, duh).

So, maybe now you're thinking, "Big deal. I made stuff with Play-Doh all the time." Not like this, you didn't. And have your sculptures ever appeared in British Vogue spreads? Yeah, mine, neither.