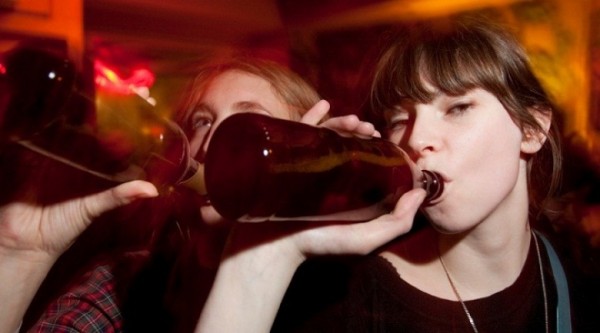 Well, the reports are in, and I'd like to offer the ladies a big ol' "Well, duh" on behalf of Foodbeast. According to a study titled "Alcoholism: Clinical and Experimental Research" (rude) by Bettina Hoeppner,  college women tend to drink more heavily than their male counterparts.

Before you start blasting celebratory Spice Girls, you should know said "limits" were imposed by the National Institute on Alcohol Abuse and Alcoholism (NIAAA). According to the NIAAA,  men should stick to five drinks a day, and fourteen drinks a week (at most, obviously), while women get stuck with four drinks a day and seven -- SEVEN -- drinks a week. (The report does acknowledge that most of us will think these numbers are insultingly low, but also urges to watch out for the effects of binge drinking. Sad face.)

As if this lame double standard (which actually has to do with alcohol-related problems occurring at lower levels of intoxication in women as opposed to men) isn't enough of a reason for girls to want to drink to excess, there's the science half of things. We'll let Melissa A. Lewis, associate professor of psychiatry and behavioral sciences at the University of Washington, explain it to you:

Even if you hold weight constant, there are differences in terms of how alcohol affects men and women. For example, men have more of an enzyme in the stomach – a gastric alcohol dehydrogenase – that lowers the amount of alcohol that makes it into the bloodstream. Also, women have less blood going through the bloodstream than a man at the same weight, so alcohol gets more concentrated in the bloodstream.

In short, men drink more often, but ladies -- at least college ladies -- do it better.

Anyone who finds this news surprising has clearly never been on the tail end of having a roommate go through a bad break-up. How else do you handle finals week, unemployment, stupid boys, and that paper you haven't finished yet? That's right: Girl's Night.