This is weird for me to write. Let me explain.

I'm a 29-year-old co-founder of Foodbeast, a website and media company whose content is seen by over a billion people a year. Our articles are read on Foodbeast.com and our videos are viewed on Facebook, YouTube and Instagram. We have some premiere food and travel shows in our network now. My work day consists of answering emails, thinking of content ideas, client relations and growing our audience.

I started Foodbeast close to 10 years ago as a blog. It was a time prior to Facebook's newsfeed, before Instagram was a seed in Kevin Systrom's entrepreneurial ballsack — in short, social media as we know it did not exist.

I was still in college at the time and had a passion for writing and telling stories in any medium I could. Whether I was blogging about my friend attempting to eat 30 Sloppy Joes in one sitting inside a school cafeteria, the new burgers at Carl's Jr., or using a MiniDV cam to film myself burning the roof of my mouth on hot pot the first time — I just wanted to tell stories I cared about.

I wanted to discuss food sans all the pretentiousness, because the proposition of Food Network being the sole voice for food was starting to feel stale to me. Fast forward 10 years later, Foodbeast is a humble company of creators, social media managers, ad sales, writers and video producers that continue to live out that vision. To say we owe a LOT to social media would be an understatement. Before Facebook and YouTube, our monthly audience maxed out at 2 million people a month. That's a LOT of people, don't get me wrong, but when technology and hackers like Mark Zuckerberg, and the bros behind YouTube gave us some bigger microphones to tell our stories through, our audience ballooned. For a self-funded, entirely private company like Foodbeast, social media gave us an opportunity and voice we likely wouldn't have had without it.

That said, I just deleted Facebook, Instagram, Twitter, LinkedIn and Snapchat from my phone. Any social application that gives me access to a seemingly unlimited amount of people, I've removed. Only 1-on-1 conversations. Text and phone is cool. No "social validations" for a while. No quick social media dopamine hits to vacantly boost my mood when people like or view my "content." No addictive social validation loop. Gone:

I didn't run this decision by my business partners, my family — I didn't want to make a symbolic gesture by announcing "going dark" on all my social feeds by uploading some dumb all black photo. I'm obviously not looking to advocate for the eradication of the amazing tool that social media is — my business wouldn't have succeeded without it. With social media I have the ability to, within seconds, speak to anyone on fucking planet Earth. It's an amazing tool, I want to use it, but I no longer feel like I have any control over it. 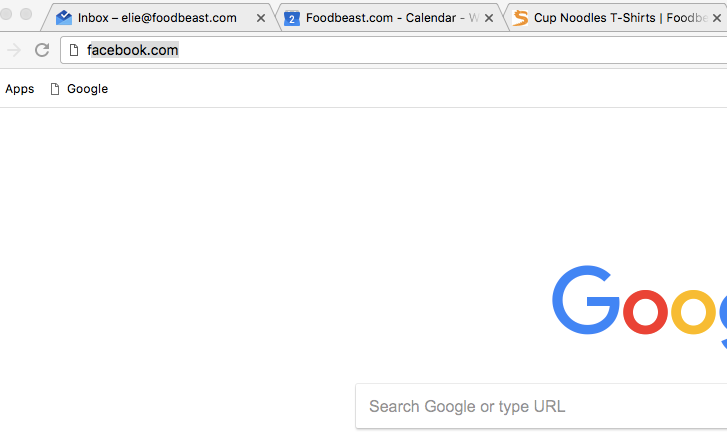 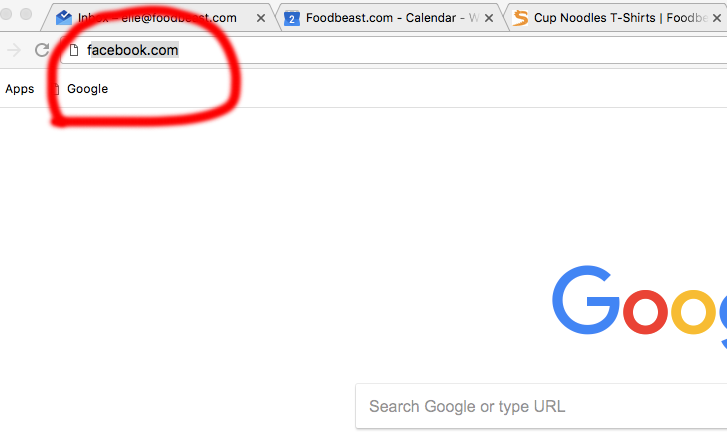 Fuck, I literally just switched tabs while writing this — entirely muscle memory — to check Facebook. The above is literally a screenshot, in real time, of me stopping the task at hand and going to Facebook. Good thing I've logged out of all of it. But seriously, I just hot-keyed my keyboard to spawn up a new tab and began typing 'F-A....'

This morning, on our bi-weekly Katchup podcast I do with my co-founder Geoff Kutnick, the topic was the Most Important Food Instagrammers of 2018. I had been planning to discuss my research, interviews and surveys I'd accumulated over the past couple weeks. Who's the most important? Who takes the best photos? Who has the best engagement? My goal was to finish the article before the podcast went live. I didn't. I must have been too busy to finish... hm.

If you listen to the podcast, you'll notice that I nearly crack and lose it towards the end as I describe Facebook "not giving a fuck about you." The one bit of my research that stuck with me so profusely happened to come from a random YouTube video featuring ex-Facebook execs talking about social media.

"I think we have created tools that are ripping apart the social fabric of how society works," Palihapitiya said in front of students at Stanford Graduate School of Business.

Alright Chamath, you sound CRAZY, dawg. Easy to sit on your billions and say you don't "do" social media now. But...

...then something clicked for me.

I know these tools inside and out: Facebook, Twitter, Instagram. They're crucial and give us a wealth of power and communication. But who's really in charge? I hate to call social media a drug, in fear of sounding like my mom circa the grade school years telling me my hours of Nintendo were turning my brain to mush, but fuck dude, I can't take a shit without passively scrolling Instagram. I'd more rather have my phone on the toilet than toilet paper — at least I have my phone to look up alternatives to wiping my ass when the TP is depleted.

I can't even go to the gym without checking Twitter for that fire Lavar Ball Tweet. I reward every task on my work 'to-do' list with a quick "hit" of social media. H ow come no one has checked me into fucking rehab yet?!

A study in 2016 (yeah, it's two years old but it's the first study that came up in Google, sue me) says the typical cellphone user touches his or her phone 2,617 times every day. Bruh. That's a TYPICAL person. And that's an OLD study.

Psychological and mental health aside of living within the walls of a digital world for a majority of your day, the physicality of my neck crane-ing over 5+ cumulative hours a day actively using my phone while I wait for people to like my Instagram photo is fastidiously putting a herniated disc into my neck. Truly, my neck hasn't stopped hurting for the past couple years.

Bruh, it hasn't been but a couple hours, but speak of the devil:

I've found I haven't been able to write like I used to. I'll get 400 words in and my mind will find some unexplainable reason that I must check Instagram. An hour of scrolling later, I forgot what I was writing about, have jumped to Facebook, ignored my girlfriend's texts and cracked my neck three times since there's no "healthy" way for you to posture looking at a 4 inch screen on a couch.

I haven't published a memorable article on Foodbeast in the past year or so. It took me "weeks" to get 80% done on three different articles, tens more in drafts. I even went on a "spiritual food journey" during a recent trip to Seattle and left my phone in my room for 24 hours. I documented every food I ate and person I encountered in a journal. A spiral-bound book of blank paper and a pen that ejaculates ink is what people used to use to document memories. It was brilliant day. It was eye opening. I felt like Bourdain on his third book. On the 25th hour when I sat down to write about my day sans-phone, I got two sentences in to my recollection, got distracted by a glowing notification on Instagram and never looked back at that draft.

It's been five months since then.

It's February 1st now. I'll use social media again in March. I won't be able to tell if people are "commenting" on this story, or the subsequent journal entries I'll produce this month, but you can email me what you think.

I'd love to hear if I'm crazy. Will my food taste better now? Will my mind change? Does your neck hurt, too? Do you get anxiety about taking shits without your phone? Who will I share my food photos with? Have you ever lost your iPhone for a few hours and felt like you were completely void of meaning and direction in your day? E-mail me. Don't Tweet me, don't DM me on Instagram. I can't see your messages on Facebook — but I can see your e-mails. My email is: elie@foodbeast.com

My Managing Editor didn't proof this story. There may be typos. Like I said, I haven't written in a long, long time. I've decided not to wait until March to journal my story, 'cause when I pick up the pipe again, I may just forget what the fuck it is I wanted to say.

Now you see why this is weird for me to write. I'll see you tomorrow with more.