9 Things You Didn’t Know About Chuck E. Cheese (Besides the Atari one)

A musically talented rodent that isn’t named Mickey has quite the fan base. With close to 600 pizza parlors in the U.S., South America and the Middle East, this privately-owned fun center is the old school version of Dave & Buster’s. Get to know our entertaining character, Mr. Cheese, and his fully baked empire a bit better-- after you use some hand sanitizer.

Chuck was meant to be a coyote

Due to either the founder’s or the animatronics team’s inability to differentiate between a rat and a coyote costume, a rat mascot was created. Even then, Chuck E. Cheese was supposed to be Rick Rat’s Pizza, but their public relations department thought the throwing the name of a plague-carrying rodent on their signs would turn people off. Finally, in 1995, they performed a complete overhaul of the chain and Chuck suddenly became a (more approachable) mouse. 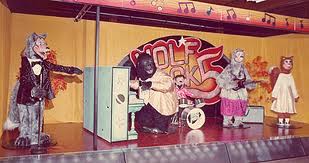 In the land down under, their “Chuck” is otherwise known as a Technicolor dream, a.k.a. vomiting. Sound call, considering they’re already dealing with a rodent mascot.

You can cook with Chuck’s cheese at home

If you’re a fan of the slice, they now sell a grocery line of shredded cheese featuring the mouse man himself on the packaging. Also in stores, Chuck-branded string cheese. Although we’re most curious about the lunch box-friendly yogurt squeezes in melonberry/cotton candy tastes.

They also use nearly 85,000 pounds of pepperoni monthly on cheesy pies.

You can book a special appearance

While only non-profit private and public schools with over 75 students can book an event, the perks are pretty sweet. Fifteen percent of sales are donated back to school, and educators earn a free meal and trip in the Ticket Blaster. If you’ve always wanted to stand in a large wind tube and collect the tickets flying around, now’s your chance. 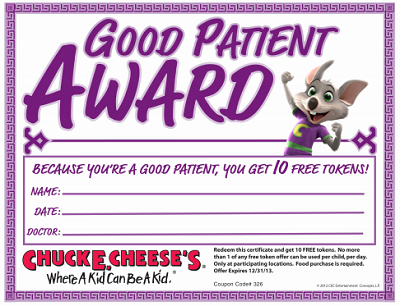 “Tokens for Grades” will reward kids with 10 gold doubloons when they show up with a current report card. Or download and complete their “Daily Chores” calendar after two weeks of tasks for more coinage. In addition, an incentive to book a party online includes 100 bonus tokens the day of your event.

If that doesn't happen, discounted game tokens are available 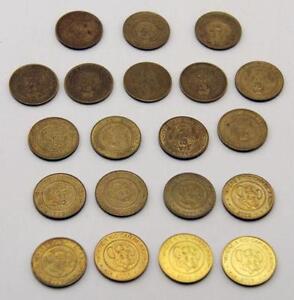 You can find Chuck E. Cheese tokens for about half-price off eBay. Make sure the tokens are legit (with Mr. Cheese pictured on them), and not generic ones. Using non-Chuck E. Cheese tokens in their games is considered theft. Don’t get too many, though. Corporate is working on a rechargeable card to take the place of tokens.

Barbie has never shied away from a little brand placement. Although, it is a bit much for her to have a pair of cheesy, Chuck E. Cheese outfits. The first iteration featured a custom shirt and tote to go with her tuxedo. More recently, in 2001, she was spotted sporting a bold logo graphic. 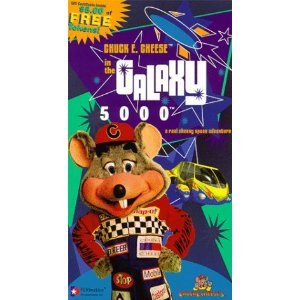 Released in 1999, Chuck E. Cheese in the Galaxy 5000 followed our determined dairy leader to planet Orion to race in the Galaxy 5000. Gold diggers, cheaters and doubts of self-confidence almost cause Chuck to throw in the towel, but cheesiness prevails. Never heard of it? It was a direct-to-video release (ask your parents about VHS tapes).