Why do we eat fast food? Chances are, because we’re broke and too lazy to cook ourselves. Now, to be fair, scooping ice cream chunks into pre-made taco shells can’t strictly be classified as “cooking,” but part of me wishes good ol’ T-Bell would just bring back the in-store Choco Taco and stop asking people to do things for themselves.

First spotted back in August, Taco Bell is apparently selling do-it-yourself dessert kits at Wal-Mart. Available in “Chocolate Taco” and “Cinnamon Nachos,” the $3 kits come with almost everything you need to be an enterprising fattie: chocolate-flavored corn taco shells, chocolate sauce and sprinkles for the Choco Taco, and cinnamon tortilla chips, caramel and toffee bits for the nachos. The ice cream, unfortunately, you’ll have to pony up another $3 or so for, sigh. 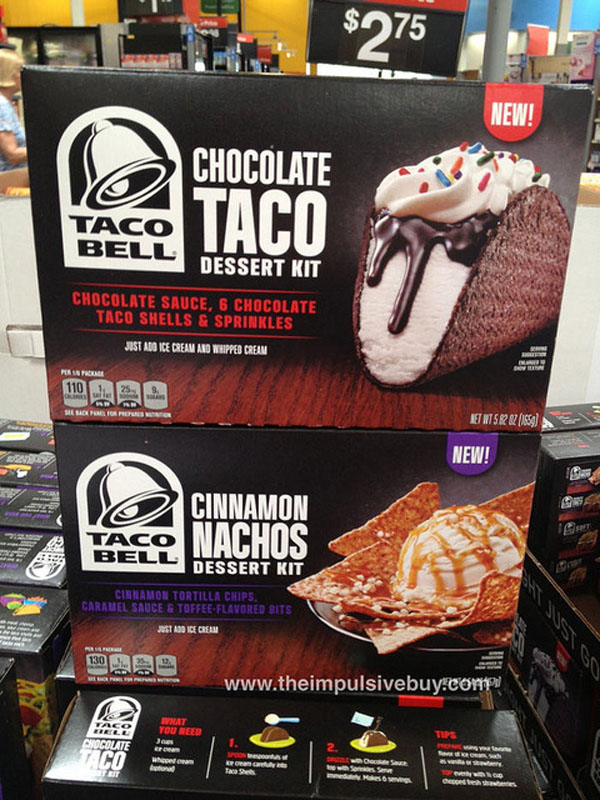 Marvo from The Impulse Buy reports the shells are pretty fragile, and most people will probably wind up eating chocolate nachos rather than chocolate tacos by the end of their endeavors. We haven’t had the chance to try them yet, but “fragile ice cream receptacles” seems like a pretty solid (heh) reason not to.

Just think, if you know the quality’s going to suck anyway, wouldn’t you rather outsource the labor?